Where Can You Find Acres of Diamonds? 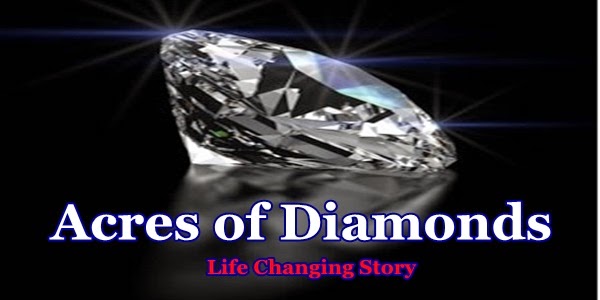 In the late 1800’s Russell Conwell became famous for his lecture in which he encouraged listeners to find the “acres of diamonds” in their own backyards. Conwell was a Baptist minister, the first president of Temple University, and a captain during the Civil War. At the ten year reunion of his troops, he delivered the Acres of Diamonds speech. Thereafter, he was asked to deliver the speech over 6,000 times around the world.

The Acres of Diamonds Story

Acres of Diamonds is a fictional parable Conwell heard while traveling through present day Iraq in 1870, and is the story of a wealthy and contented Persian farmer named Ali Hafed. One day a travelling priest stopped by Ali Hafed’s farm and told him all about diamonds, what they looked like, what they were worth, and where they might be found. Ali Hafed soon became consumed with thinking about diamonds, discontented to the point that he sold all he had and left his family to search the world for diamonds.

In the end he found no diamonds. Penniless, exhausted, and broken Ali Hafed cast himself into the sea. Years later, the man who had purchased Ali Hafed’s farm found a sparkling stone in a stream cutting through his land. It was a diamond. This, according to the parable, was the discovery of the famous Golconda Mine that produced the crown jewels of England and Russia.

The point of the parable is that if Ali Hafed had stayed at home and looked for diamonds on his own farm, he would have found “acres of diamonds” instead of poverty, starvation, and death by suicide.

The moral of Acres of Diamonds is that if you want a better opportunity, the first place you should look is your current situation. Most of us know someone who has left their job due to problems they were encountering only to find similar problems in their new jobs. Or, moved to a new city because of a lack of opportunity when they could have saved themselves and their families the pain of moving if they had tried to improve and “mine” their current situation. We see the applications of this parable all around us. Three in particular are applicable to those who serve the local church.

A parallel to the Acres of Diamonds parable can be found in the Prodigal Son parable. Specifically, where the son was discontent and left for greener pastures yet had the good sense to return home and beg for forgiveness. Like the Prodigal Son, for most of us our diamonds are usually not in some far away locale, but rather in our own back yard if we will only take the time to look.

Jim’s passion has always been to utilize his gifts of leadership and administration to equip men and women for ministry. With the heart of a shepherd and a keen understanding of church organizational structure, Jim has been a mentor and coach to hundreds of ministers and church members – myself included – throughout his 30+ years of ministry.  I am confident God will use Jim to do the same for you through his new ministry, Sacred Structures.