The “5 Whys?” Process For Understanding The Root Cause Of Any Problem 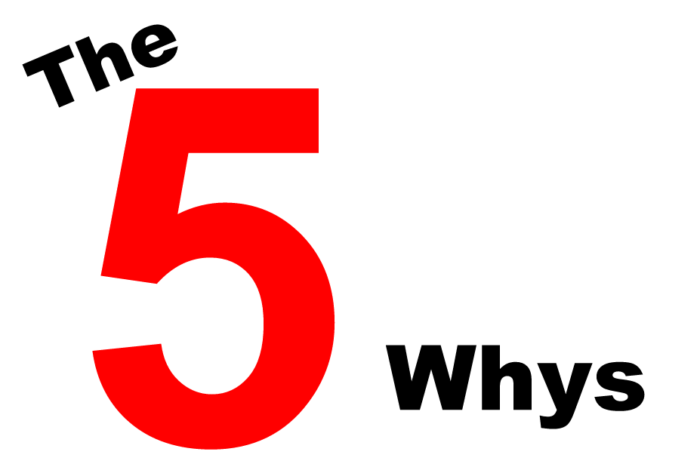 Too often in our attempt to solve the various problems we confront in the church we stop at treating the symptoms rather than getting to the true cause of the problem. That is why so many churches have problems that won’t go away. We resort to quick fixes that address only surface issues.

I have found the “5 Whys?” process an effective tool for examining the cause and effect relationships underlying a specific problem, determining the root cause, and arriving at a solution that keeps the problem from recurring. The primary goal of the “5 Whys?” technique is to determine the root cause of a problem by repeating the question “Why?” Each answer forms the basis of the next question. The “5” in the name derives from the number of iterations needed to resolve the problem. By repeatedly asking the question “Why?” you peel away the layers of symptoms which can lead to the root cause of a problem.

Sakichi Toyoda, founder of Toyota Industries, developed the technique in the 1930’s during the evolution of its manufacturing methodologies. His method became popular in the 1970’s, and Toyota Motor Corporation still uses it today as a critical component of its approach to problem solving. The technique has seen widespread use beyond Toyota because of its simplicity and effectiveness in determining a problem’s root cause and developing counter measures to prevent the problem from recurring.

When to Use the “5 Whys?” Technique

Repeatedly asking “why?” may be a child’s preferred technique for getting the information they need, but it is also a remarkably simple and flexible organizational tool with a variety of applications. You can use the “5 Whys?” for:

Let’s take a closer look at this simple but powerful tool for cutting quickly through the outward symptoms of a problem and drilling down to reveal its underlying causes, so that the problem can be dealt with once and for all.

Start with a problem and ask “why?” it is occurring. Make sure that your answer is grounded in fact, then ask “why?” again. Continue the process until you reach the problem’s root cause, and you can identify a counter-measure that prevents it from recurring.

In some instances you may have to ask “why?” more than 5 times before you get to the root problem. In other situations you may identify the root cause before you get to your fifth “why?” The important thing to keep in mind is to stop asking “why?” when the useful responses stop coming. An appropriate counter-measure, solution, or process change should then become evident.

And, not all problems have a single root cause. “5 Whys?” can lead you to pursue a single track, or a small number of tracks indicating there could be multiple causes. If you list multiple potential paths, the method must be repeated by continually asking “Why?” for each path until you reach the root cause for each one.

The Problem: The car won’t start.

The Problem: Church membership is down but attendance is up.

The questioning for each of these examples could be taken to the sixth or seventh level. The key is to ask “Why?” until you identify the root cause. A real root cause should point to a process or behavior that failed, is not working consistently, or doesn’t exist. The first example points to a broken behavior, following the recommended service schedule. The second example points to a broken process, the staff’s failure to develop the materials, a class, or other means for communicating the benefits and expectations of membership.