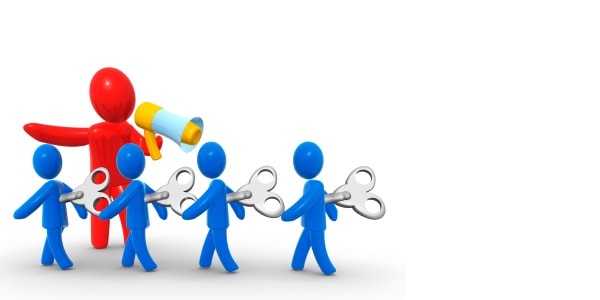 A command, demand, and control leadership approach is based on models from the military, where top generals develop strategy, the officers translate the strategy into action plans, and soldiers execute. If you don’t follow orders you get yelled at, or worse, thrown in the brig. In a command, demand, and control leadership environment the ability to take orders and execute them is valued and rewarded.

This authoritarian hierarchal approach with a powerful top executive was adopted by business to help improve productivity, effectiveness, and efficiency. Not surprisingly, the church thought it was a pretty good approach as well so most church structures that have been adopted in recent years concerns itself with exercising leadership in this way.

Difference in Command, Demand, and Control

Many people consider the words command, demand, and control to be similar but there are clear differences.

Command is usually associated with an order, typically from someone in a position of power and authority. For example, in the military an officer has the power to command his troops. In such a scenario, the subordinates do not argue with the officer in charge but simply follows the order.

It is a common belief that church and business leaders should have the ability to command people. Leaders of this nature command respect, by virtue of their position, authority, and influence in the organization. Power is essential to leadership yet unhealthy use of power results in a culture where followers are expected to obey orders without question and without input.

Demand is usually associated with a strongly worded requirement with implied negative consequences if not followed. For example, when a leader firmly asks or tells a subordinate to do something, the subordinate feels forced or pressured to comply.

Demanding leaders frequently have followers that feel their demands are harsh, unrealistic, unnecessary, compulsive, or even obsessive. Leaders who are demanding often have followers who follow out of fear and self-preservation rather than confidence and respect.

Control is usually associated with setting limitations, measures, policies, and boundaries as a primary means of influence. Controlling behaviors include a focus on details and a strong need to check everything delegated. For example, when a leader determines both the goals and action steps for a subordinate they are exerting control over the behavior of the employee.

Controlling leaders typically try to exert control over the behaviors of people as well as the processes, systems, and direction of the organization. Often followers of controlling leaders feel a lack of freedom to exercise their own initiative and judgement.

The Problem With Command, Demand, and Control Leadership

Command, demand, and control leadership is based on establishing and maintaining power over, and control of people and organizational direction and processes. On the surface, this sounds like a good idea: you certainly don’t want the staff’s behavior to be out of control or the churches initiatives to be out of step with its mission, vision, and values.

But, one of the problems with the command, demand, and control leadership philosophy is that it is partially based on untruths and false assumptions. Namely, that employees can’t be trusted and must be told what to do, and that upper management is superior in knowledge and wisdom and has the right answers all the time.

Next week we will offer church leader’s an alternate approach to the command, demand, and control leadership approach.