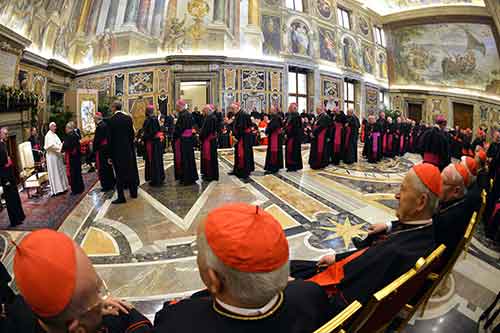 In a December 19th post Rev. Bosco Peters reported Pope Francis received the senior officials of the departments of the Roman Curia on Monday, December 22, in their traditional exchange of Christmas greetings. In his address, Pope Francis listed 15 ailments that are temptations of both Clergy and Church.

Peters quotes Pope Francis as saying, “It is good to think of the Roman Curia as a small model of the Church: that is, a body that seeks, seriously and on a daily basis, to be more alive, healthier, more harmonious, and more united in itself and with Christ.”

I found Pope Francis’s list of 15 sicknesses of the Church a challenge worth any Christian Leader’s consideration as New Year’s resolutions.

1. Feeling “immortal” or “immune” or even “indispensable”

Visit to the cemetery to help us see the names of those who “maybe thought they were immortal, immune and indispensable.”

Those who, like Martha in the Gospels, “lose themselves in their work, inevitably neglecting ‘what is better’: sitting at Jesus’ feet.”

Those who “lose their internal peace, their vivacity and audacity, to hide under papers and become ‘procedural machines’ instead of being ‘people of God.’”

“When the apostle plans everything in minute detail and believes that, through this, things progress effectively, they are becoming an accountant. Good planning is necessary — but without falling into the temptation of wanting to enclose or steer the freedom of the Holy Spirit.”

Those who “lose the community between themselves … becoming ‘an orchestra producing undisciplined noise.’”

A “progressive decline of spiritual faculties,” living in a “state of absolute dependence on their, often imagined, views,” seen most in those “who have ‘lost their memory’ of their encounter with the Lord.”

“When the appearance, the color of vestments and honors become the first objectives of life … leading us to become false men and women, living a false ‘mysticism.’”

Living “a double life, a result of the hypocrisy typical of mediocre people and of advancing spiritual emptiness, which degrees or academic titles cannot fill.”

A “serious illness” that can begin with a simple chat and sometimes end up with “cold-blooded murder.” It is the disease of cowards, who do not have the courage to speak upfront and so talk behind one’s back. “Look out for the terrorism of gossip!”

Those who “court their superior,” becoming victims of “careerism and opportunism” and “live their vocation thinking only of what they must gain and not of what they should give.”

“When, because of jealousy or cunning, we rejoice in seeing others fall, rather than lifting them up and encouraging them.”

People who are “scowling and unfriendly” with a “theatrical severity” and “sterile pessimism” that are often symptoms of “fear and insecurity.”

“When the apostle seeks to fill an existential void in his heart by hoarding material possessions, not because of necessity, but only to feel secure. In reality we can carry nothing material with us … and all our earthly treasures — even gifts — can never fill the void.”

“When belonging to a clique becomes more important than belonging to the Body and, in some situations, than belonging to Christ himself. Even this disease starts from good intentions, but in time it enslaves all its members becoming ‘a cancer’ that threatens the harmony of the body and causes so much illness.”

“It is the disease of those people who relentlessly seek to increase their powers. To achieve that, they may defame, slander and discredit others, even in newspapers and magazines. Naturally, that is in order to show off and exhibit their superiority.”