What Is The Change Curve And Why Should I Bother To Understand It? 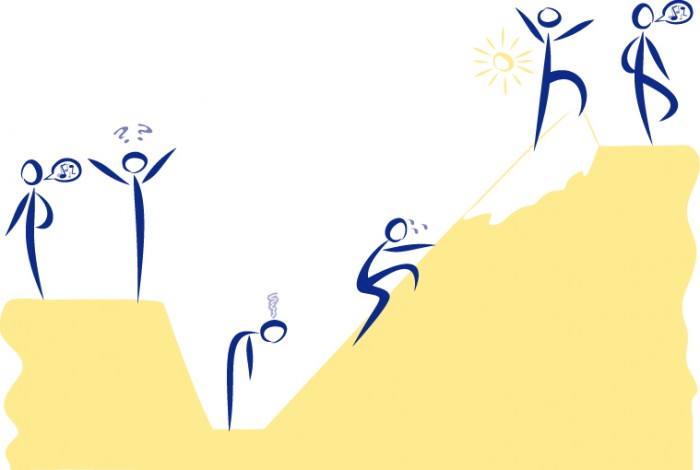 One of the more useful concepts that has come out of the formal study of Organizational Change Management is the simple idea that people go through a predictable cycle as they deal with any significant change.

By anticipating how people will go through any given change, a change leader can help stakeholders by giving them what they need to continue along their path.

The Change Curve is based on a model originally developed in the 1960s by Elisabeth Kubler-Ross to explain the grieving process. Kubler-Ross proposed that a terminally ill patient would progress through five stages of grief when informed of their illness.

She further proposed that this model could be adapted and applied to any dramatic life changing situation and subsequently has been widely utilized as a method of helping people understand their reactions to significant change.

The Change Curve, and its associated emotions and actions, is a popular and powerful model to understand and predict how performance and attitude is likely to be affected by the announcement and implementation of significant change. And, more importantly, how leaders can help and support people make their own personal transitions.

Let’s Go Through The Change Curve Stage By Stage

The model is usually illustrated by a left-to-right V-curve that starts with a level line on the left then drops dramatically before climbing to a point higher than where it started. There is a vertical axis on the left representing performance and attitude and a horizontal axis at the bottom representing time.

The Change Curve is designed to describe the stages most people go through as they adjust to change. The model is generalized, and the shape of the curve may vary as well as individual reactions.

Stage #1 – The Dip: When a change is introduced into a steady state people’s initial reaction covers a range of emotions and actions as they react to the challenge of the status quo.

Typically, production and attitude drops when the change is initiated and is represented by the left side of the V-curve. The first responses are usually negative and act as downward pressures that may include:

At this stage, the organization experiences disruption which, if not carefully managed, can quickly spiral into crisis, chaos and disharmony.

This is a critical stage for communication. Here people need information and need to understand what is happening and why. Unaddressed questions fuel doubt, which leads to distrust which drives lower acceptance. Leaders should communicate frequently, take the time to address questions and make sure people know where they can go for more information.

Failing to plan for this dip can prolong or even derail the change initiative. And if not understood or expected can give an early false read the change is failing.

Stage #2 – The Valley: At this stage the change is well into implementation and resistance, hopelessness and despair is at its peak. If not carefully managed people will jump ship and you will be tempted to join them.

There are several catalyst that keeps stakeholders mired in the valley of the curve.

Information, training, and the tools, resources and systems to easily and successfully implement the change are the primary up pressures leaders can use to move people out of the valley.

Stage #3 – The Upturn: This is the turning point for people and the organization and is represented by the right side of the V-curve. Tolerance moves to acceptance as the change is assimilated through information, training, resourcing and problem solving. Attitudes, trust, productivity and confidence improve as people test, explore and experience the benefits of the change.

Here the role of the change leader is mostly that of a patient supporter and encourager. One on one coaching, tangible rewards and personal and team recognition can keep the momentum going. This stage is vital to discovery, experimentation and confidence building and may take more time than the other stages.

Simply allowing the time for people to continue to learn and explore without the pressure of expecting a 100% success rate can be the greatest gift the change leader can provide at this stage.

Stage #4 – The New Normal: This is the stage you hope, work and pray for! This is where the change is embraced and positively advocated by the majority and becomes integrated in the culture of the organization. You start to see the tangible benefits and positive effects of the change you have worked so hard for.

The curve ends with a flat line on the far right-hand side representing the result of the change. You’ll notice that it is shown as being higher than the starting point on the left to illustrate the positive improvement over the steady state when the change was initiated.

Anyone who’s lived through a failed change knows that this is not always the case. Sometimes changes are for the worse.  Sometimes “improvements” result in permanently lower levels of productivity and attitude. The changes that have the best chance of achieving a result resembling the higher outcome in the graph are those that set realistic expectations for end results and actively and persistently guide the change.

The Change Curve is a very useful tool for church leaders to help people understand the nature of individual, team or organizational change. Knowing the V-curve is a normal part of change makes a change easier to handle and reduces resistance, guilt and blame.

As with any personal or organizational change, there are no clear boundaries to any of these stages. It is more of a gradual realization that things have subtly transitioned.

The goal of the change leader is to help make the transitions as effective and painless as possible. Each person will experience transition through the curve at slightly different speeds and may be at different places on the curve. Knowing where an individual is on the Change Curve will help when determining how and when to communicate information and the level of support and encouragement they need.

The fact is that churches and ministries don’t change simply because of new and improved programs, processes and structures. They change because people within the organization adapt and change too. Only when people make their own personal transitions will the church reap the benefits of the change.

As someone leading the change within your church, the challenge is not just getting the strategy, structure and systems right, but also helping and supporting people through their individual transitions.

By providing timely education, information, support, resources, etc. church leaders can help the staff and congregation effectively transition through the curve and emerge on the other side.

The easier you can make the change journey for people, the sooner the church will benefit, and the more likely you are of success.

Jim offers training for our church planting residents by providing practical tools and proven methods for ensuring the ministry, and more importantly our hearts, can withstand the pressures and obstacles to come. He does not just talk about it though. He has been modeling this to our team for many years. We are thankful for Jim’s passion and his drive for drawing out in us what is most important to God.