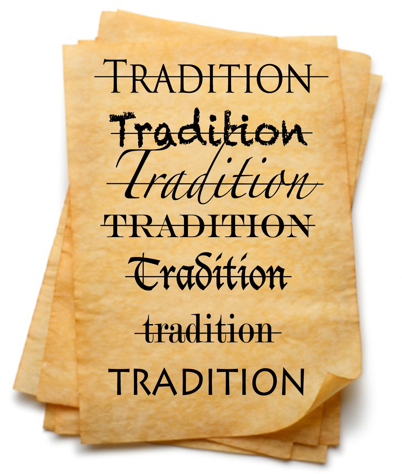 Political, social and church history shows us that when things change too quickly or when people fear the future they will flee to leaders who promise to restore the glory of the past.

But history also demonstrates that you cannot move forward with nostalgia. Although it is impossible to do, people will often try to go back to ‘what was’ when the present is in crisis and the future is uncertain. In those times church traditionalists who see themselves as guardians of the old order arise and organize to set things right and return to ‘old time religion’ and the ‘ways and faith of our fathers.’

Dogmatic traditionalists regularly reject changes in worship, governance, church architecture and ministry. They insist that the old way is the best way and the best way to insure the future is to return to the past. They insist those ways will still work if we will only adhere to the old standards, beliefs and behaviors.

Such movements create high levels of fear among congregants and make scapegoats of pastors and other change leaders. It wasn’t the prostitutes, the tax collectors and alcoholics who called Jesus a “devil.” It was the pious religious leaders who wanted to safeguard the old church system.

Fear is a powerful motivator and can cause the good old days to look pretty good to those caught up in a sea of change and uncertainty. If defenders of the mythical golden time can play to anxieties and raise fear sufficiently they can block or reverse innovative change.

They Call Us Protestants for a Reason

Few groups are more vocal in opposition to change than Protestants. You can make an argument that it is in our very DNA. We were birthed by a people of faith who were known for protesting social, cultural and religious change. But at times in our past I fear we have protested too much….or at least ineffectively.

When these protest movements have understood the times and had a view to the future they have been unifying and catalyzing, but when they have focused on fear and returning to the past they have proved divisive and derailed needed change. Too often we have opted for the security of the past rather than the uncertainty of a journey into the future.

How then can we lead our churches from a place of fear and a desire to return to the ‘glory days’ to a path of hope and discovery of how to be the Church within a new context? As Shakespeare’s Hamlet put it in his soliloquy on suicide, “Aye, therein lies the rub.”

Five Steps to Counter Fear of Change and Traditionalism

First, church change leaders must be aware and accept that though we are in an age of rapid change, change in the church always has, still is and most likely always will be a v-e-r-y l-o-n-g process. Most people won’t accept significant change until they have hurt enough, heard enough or had enough……..and that takes time. Church change leaders must be committed to exercising patience in moving toward the future while being present in the moment to see where God is working.

Second, any significant change in the church requires a work of God as well as hard work. Church change leaders must be committed to insuring change initiatives are bathed in the hard work of individual and communal prayer.

Fourth, compassion must be coupled with a willingness and ability to speak truth and wisdom in love. Change leaders must clearly and compelling proclaim a vision for what might be and instill the courage and urgency to move forward rather than back to what was.

Fifth, church leaders must offer ways beyond anxiety towards the future and glorification of the past by emphasizing spiritual practices that change the heart through new connections between God, others and self.

In a real sense we must lead people to look farther back than the recent church past to the ancient church past. We do this by revitalizing biblical practices of prayer, forgiveness, hospitality, community and service to others that allows us to see ourselves, our neighbors and the world with new eyes and experience true metanoia…….’repentance’ and ‘change of mind.’

Congregations cannot stay in a perpetual state of fear and pining for the ‘good old days’ and hope to survive, much less thrive. Change in the church must move forward on two rails.