Church Leader, Your Congregation Expects You To Make These Decisions 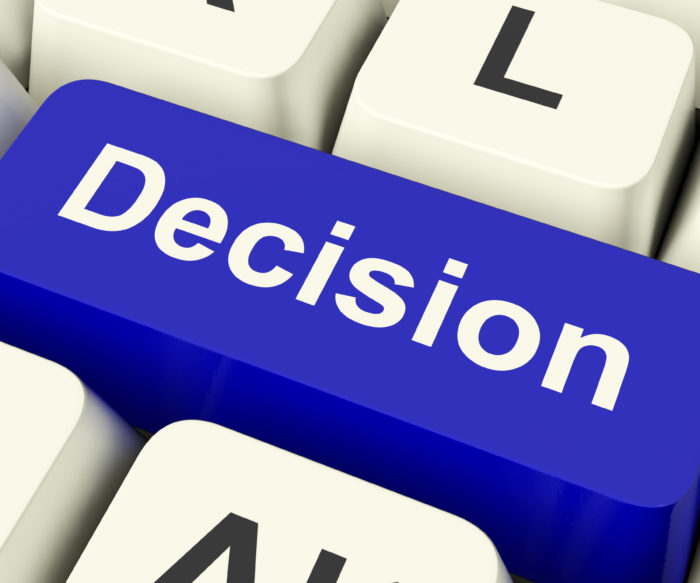 In Acts 6, the Twelve Disciples faced a difficult decision, whether or not to get personally engaged in the food distribution dispute between the Greek and Hebrew widows of the Church of Jerusalem. They faced a classic leadership decision, whether or not to put the good of the whole before the good of a few. Ultimately, they determined to assign the food distribution task to others. I have no doubt these early church leaders received criticism for delegating this responsibility, but their driving criterion was to place the good of the whole church over the good of the widow members by prioritizing their responsibilities of preaching, teaching, and prayer. And, as a result of their decision we read in verse 7 that “The Word of God prospered and the number of disciples in Jerusalem increased dramatically.”

Church leaders are consistently faced with decisions that impact some groups positively and other groups negatively. These decisions leave some individuals happy and others frustrated or angry. What is your guiding criterion for making such decisions? Certainly, the starting place is found in the quality of your inner spiritual life. Do you have the spiritual eyes and ears to see where God is working and what he is saying? Are you filled with the Spirit of God as Isaiah was in Isaiah 11:2: The Spirit of the Lord shall rest upon him: a Spirit of wisdom and of understanding, A Spirit of counsel and of strength, a Spirit of knowledge and of fear of the Lord.”

Though I am confident the Twelve Disciples first consulted God before rendering a decision on the widow food distribution dispute, it appears they also had predetermined their priorities that provided a guiding criterion for making difficult and potentially unpopular decisions.  That is, in the interest of the total church and success of its mission they were willing to make a decision that would potentially have a negative reaction or impact on some people in the church.

An Illustration From The Movie, “A Cruel Sea”

This principle is dramatically portrayed in two contrasting incidents in Nicholas Monsarrat’s novel, “The Cruel Sea” and in the movie by the same name. The story revolves around life on a British ship assigned convoy duty in the North Atlantic during World War II.

In the first incident it is night time and a tanker has been torpedoed. The ship assigned convoy duty has the responsibility for picking up survivors. Once upon the scene the captain sees 50 men afloat in the water. Because the torpedoed tanker was on fire, it lit up the survivors in the water in such a way that his ship would be visible to the German sub. The captain is forced to weigh the potential loss of 50 men in the water against the loss of 300 men on his ship. He decides to pick up the survivors, his ship isn’t torpedoed, and the captain is hailed a hero.

In the second incident, another tanker in the convoy has been torpedoed and survivors are floating in the water. As the ship assigned convoy duty approaches, the captain notices on his radar a German submarine directly under the floating survivors. The captain is again faced with a difficult decision, the potential loss of the survivors if he drops depth charges or saving the many more men on his ship if he is successful in sinking the German sub. He chooses to drop depth charges and as a result the men in the water are killed. And, what was thought to be a German submarine proves to be the sinking hull of the torpedoed British tanker. The captain is vilified and haunted by his decision.

In both instances the captain was forced to make a decision on whether or not to place the good of the entire crew over a lesser number of men…..to sacrifice a few people to benefit the whole ship and fulfill the ship’s mission to destroy enemy submarines. Most church leaders will not face such life and death decisions and will have more than a few seconds to make difficult decisions. Leaders will face decisions that will not be approved or accepted by every church member. Like, altering the Sunday schedule, changing worship styles, moving Bible Study Classes to different rooms, terminating poor performing staff or volunteers, and cutting or reallocating budget dollars.

In these situations, beyond seeking guidance from the Holy Spirit and being mindful of the church’s mission, the guiding principle must be bringing the greatest good to the greatest number. Though, as illustrated in The Cruel Sea, using this guiding principle does not guarantee a successful outcome. Therefore, it is not a ridged universal principle, but rather a general guiding principle to consider in your decision making process. But, it is vitally important to remember that as a church leader the success and survival of the church often depends on your willingness to make these difficult decisions. I would even go so far as to say the church expects you to make these types of decisions or they wouldn’t have placed you in a position of leadership. In short, if you are not prepared and willing to make these types of decisions, you don’t belong in church leadership.

Jim can help train you and your ministries break through growth barriers and reposition your church to be more effective. He is not only an exceptional leader but a gifted communicator and strategist as well. He has a God-given gift of asking unique questions to get to the bottom of issues that may have been previously unknown or unaddressed. He’s the real thing, honest, straightforward and insightful.