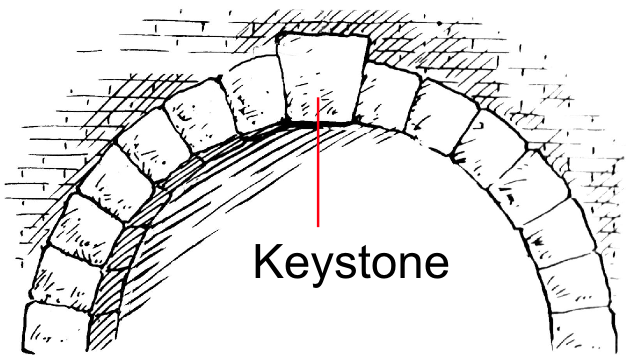 In architecture, a “keystone” is the centermost stone in an arch that supports all of the other stones, yet carries the least amount of weight. In Charles Duhigg’s book, The Power of Habit, he introduces the idea of a keystone habit, a habit that helps hold other good habits in place.

We all have habits in our lives, but certain routines — keystone habits — lead to a cascade of other actions because of them. Keystone habits create a chain reaction; adding, changing and rearranging your other habits as you integrate the habit into your life. According to Duhigg, “Keystone habits influence how we work, eat, play, live, spend, and communicate”, and they “start a process that, over time, transforms everything.”

For example, my keystone habit is getting up early. When I wake up early, I am more consistent in spending time nurturing my spiritual life and more disciplined in my exercise and eating habits. For some reason, when I get up early I think better, write better and am more productive. My keystone habit sets off a chain reaction of internal events giving me the willpower, momentum and ability to generate other positive habits. Simply getting up earlier is a trigger habit that sets off an avalanche of transforming change in my life.

“I knew I had to transform Alcoa,” O’Neill said. “But you can’t order people to change.” “That’s not how the brain works. So I decided I was going to start by focusing on one thing, worker safety. If I could start disrupting the habits around that one thing, it would spread throughout the entire company.” Within a year, Alcoa’s profits would hit a record high with a dramatic increase in worker safety. Establishing an organizational habit of suggesting safety improvements had created other habits, as well, such as recommending business improvements that otherwise would have remained out of sight. By shifting worker safety habits, O’Neill had created patterns of better communication. A chain reaction started that lifted both worker safety and corporate profits.

O’Neill’s success at Alcoa is just one example of an organizational keystone habit, a pattern that has the power to start a chain reaction, changing other habits as it moves through an organization. How might the concept of keystone habits translate to the local church?

In church circles we are more accustomed to talking about church culture than church habits, but they are similar in many respects. In fact, organizational culture may be defined as an underlying set of values and habits. Thinking of keystone habit as keystone culture can provide a blueprint for transforming church culture.

For example, at Brentwood Baptist Church in Brentwood, TN, a keystone biblical value is spiritual giftedness. Church leadership teaches, models and executes around the belief that “each member is uniquely gifted, called, experienced, impassioned and called by God to some kind of Kingdom assignment, and it is the responsibility of the church to help members discover and then equip, resource and deploy them in that Kingdom assignment.”

In 10 years over 6,000 members have gone through an intentional process of discovery and deployment in ministry assignments based upon their unique gifts, experiences, passions and callings. Emphasizing this keystone value resulted in a cascade of positive outcomes as people:

Further, prioritizing this keystone value created the leadership base to launch a multi-site campus strategy that now includes six campuses.

What Are Your Church’s Keystone Values?

What are your church’s keystone values? Typically they have distinctive characteristics. Look for church values that:

What are your church’s keystone values? Find and focus on them and then watch transformation take place right before your very eyes!

Jim Baker is a godly, servant leader who has skillfully led as an Executive Pastor. Because he understands how to communicate as well as implement effective and scalable systems and structures that provide essential ministry support for the mission of a local church, he is able to provide wise counsel to ministry leaders.